In the early 1980s, when I was 11 or 12, my dad went to Gunsite in Paulden, Arizona. The rest of my childhood was replete with stories about touring The Sconce, dinner with the Coopers (where Colonel Cooper let Dad hold Baby!), training with, and receiving the e-ticket from Colonel Cooper. 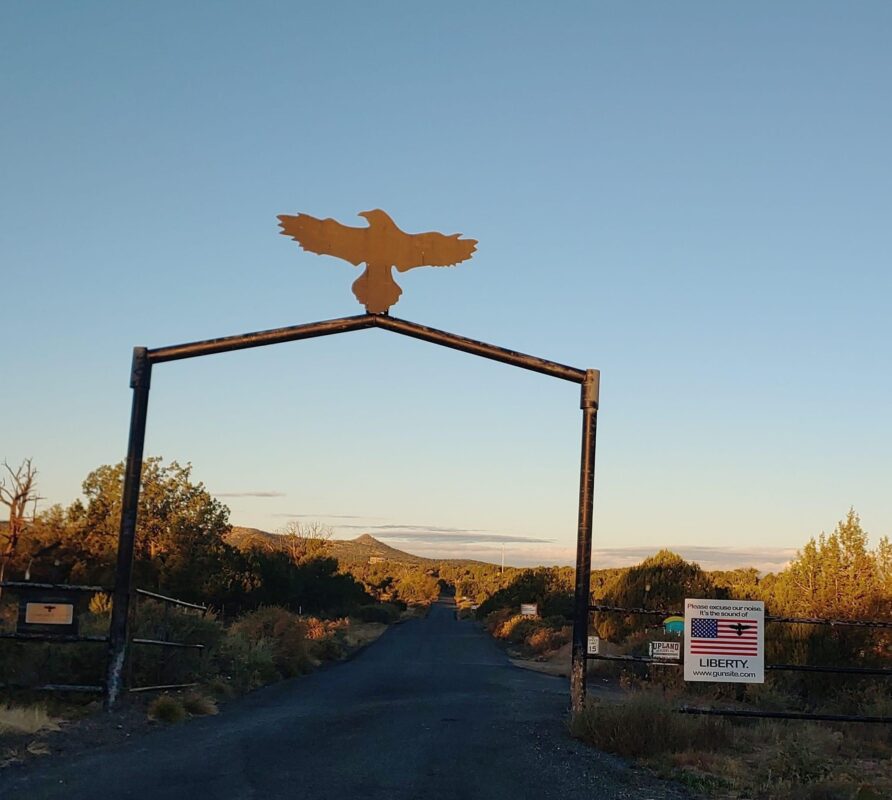 I inherited my love for Colonel Cooper and Gunsite from him. While I’m not nearly as proficient as dear old dad with a firearm, I can hold my own, and I always longed to visit Gunsite academy. I got a small taste a few years ago when I attended an Armed Women of America Arizona Chapters State shoot at Gunsite; it increased my desire to train at this much-revered institution.

I got the chance earlier this year and headed to Paulden for a five-day 250 Defensive Handgun class, thanks to a scholarship from the Jeff Cooper Legacy Foundation, followed up with the Armed Women of America Gunsite Instructor Course. The experience was life-changing. The facility, instructors, and staff were all amazing, and I learned so much during my eight days. I was able to train with Charlie McNeese, Lew Gosnell, Freddie Blish, and Steve Temerlin, followed by Jerry McCown for the instructor course. The experience and knowledge within this group were beyond my expectations.

I happily returned to Gunsite several months later for the Gunsite Alumni Shoot (GAS). Another amazing event that brings together an amazing group of shooters for a friendly competition that raises funds for the Jeff Cooper Legacy Foundation. This event was a little stressful, as it involved competition. I’m not a competitive shooter, I had no idea what to expect. Of course, as is tradition with Gunsite, the event was fun, challenging, and extremely rewarding. Gunsite CEO Ken Campbell and his staff did an excellent job organizing 250 participants, keeping the event running like a well-oiled machine, even during a monsoon. It’s an event I now plan to attend every year. 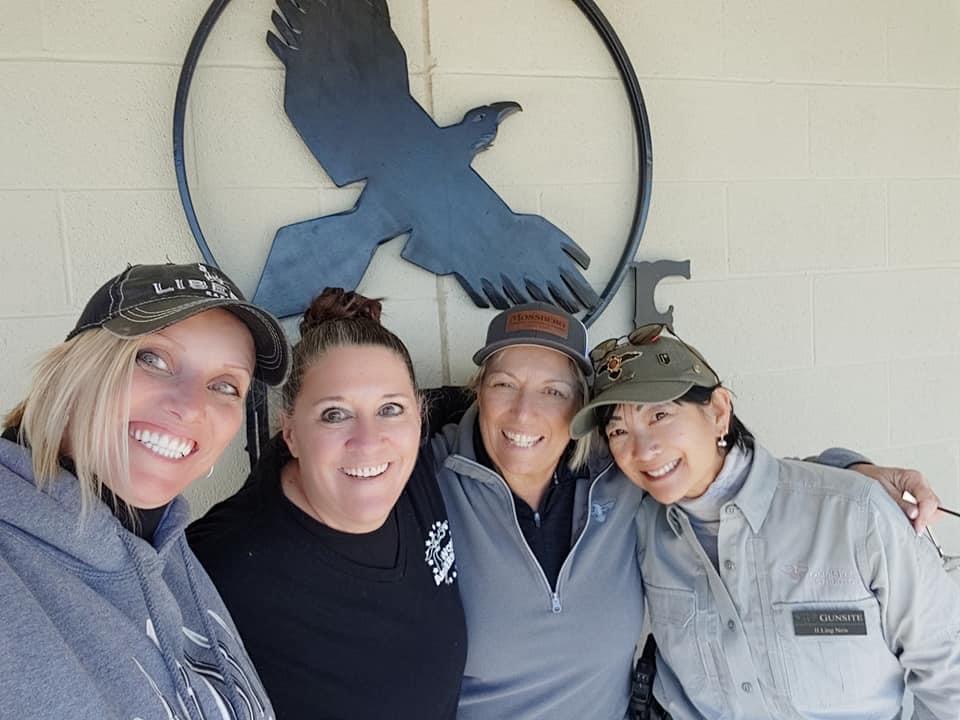 Gunsite had already started to feel like home, so I was thrilled when I was invited to a media event sponsored by Mossberg. This event was a special invitation-only 3-day course designed for Mossberg featuring Sheriff Jim Wilson, which covered some customized team tactics training. I traveled again to my happy place to participate with my co-state leader and regular training buddy, Connie.

Linda Powell from Mossberg was a phenomenal host and geared us up with the Mossberg MC2c, equipped with a Holosun Red Dot optic. I immediately loved working with this gun. It fit me very well and was solid and reliable throughout the course. The ergonomics were great, and I really liked the trigger. I’m a 1911 girl, so the trigger is a big deal. I don’t typically enjoy shooting striker-fired guns. I’ve found a few that I enjoy, and this will be added to that list. The flat profile trigger had a crisp break and tactile reset. I’ll be purchasing one of these soon.

I was extremely excited about the opportunity to work with one of my mentors, Il Ling New. I’d done a little training with Il Ling, but training with her as an instructor at Gunsite was another dream come true. I presented her with a cape emblazoned with the Armed Women of America logo, a bit of an inside joke but a heartfelt thanks for all she has so willingly contributed to our organization.

Upon arriving for our course, we spent some time in the classroom reviewing tactics, discussing scenarios, and preparing for what our instructors had in store. We were fortunate to work with Mario Marchman, Il Ling New, Lew Gosnell, and a special guest, Sheriff Jim Wilson. Being able to absorb knowledge from such profoundly distinguished instructors is almost overwhelming. I always needed a notebook so my aging brain wouldn’t forget anything.

Team tactics are a different ballgame, and I had no idea how much more brainpower I would need when running these types of drills with two people instead of just worrying about myself. We spent time on the square range practicing drills, communicating as a team, and working together. We shot drills at various distances, providing cover for our partner and doing a little movement while shooting. We worked through two-person room clearing drills utilizing blue guns, followed by the same technique with Simunition guns. On day 3, we were put to the test with three scenarios to test the skills we had been honing. To say I was nervous would be an understatement. 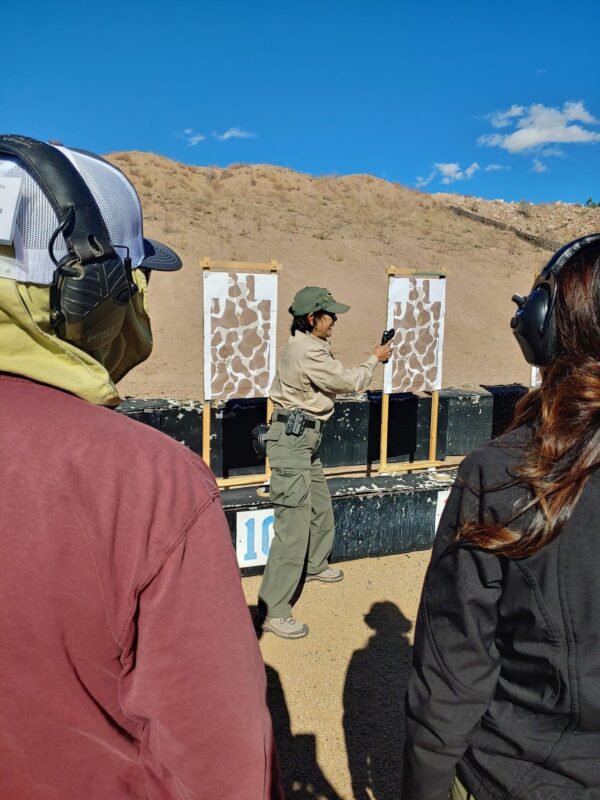 My primary goal is always not to get shot, followed closely by goal number two, not to have to shoot anyone. It was time to put my skills to the test. Our scenarios involved a restaurant encounter, a store, and an outdoor scenario. In each scenario, my partner and I used the number one tactic we teach, AVOIDANCE. I can’t tell you how many times we’ve both repeated, “the only gunfight you’re guaranteed to win is the one you avoid.” At the first sign of trouble, we high-tailed it out of there; even Il Ling commented on how fast we ran! Although I completely left Connie behind in the first scenario, I was confident she was right behind me. We made it through all three scenarios without shooting anyone or being shot at. I credit this to our constant training in situational awareness and paying attention to our surroundings. My firearms are a tool of last resort, and I proved that in scenario training.

I shot with some amazing industry professionals during the three days we trained. I felt amazing support from my fellow students, instructors, and staff at Gunsite. At the end of any Gunsite course, I have always felt like I’ve gained new members in my family. If you’ve never experienced that, it’s a terrific feeling of community. 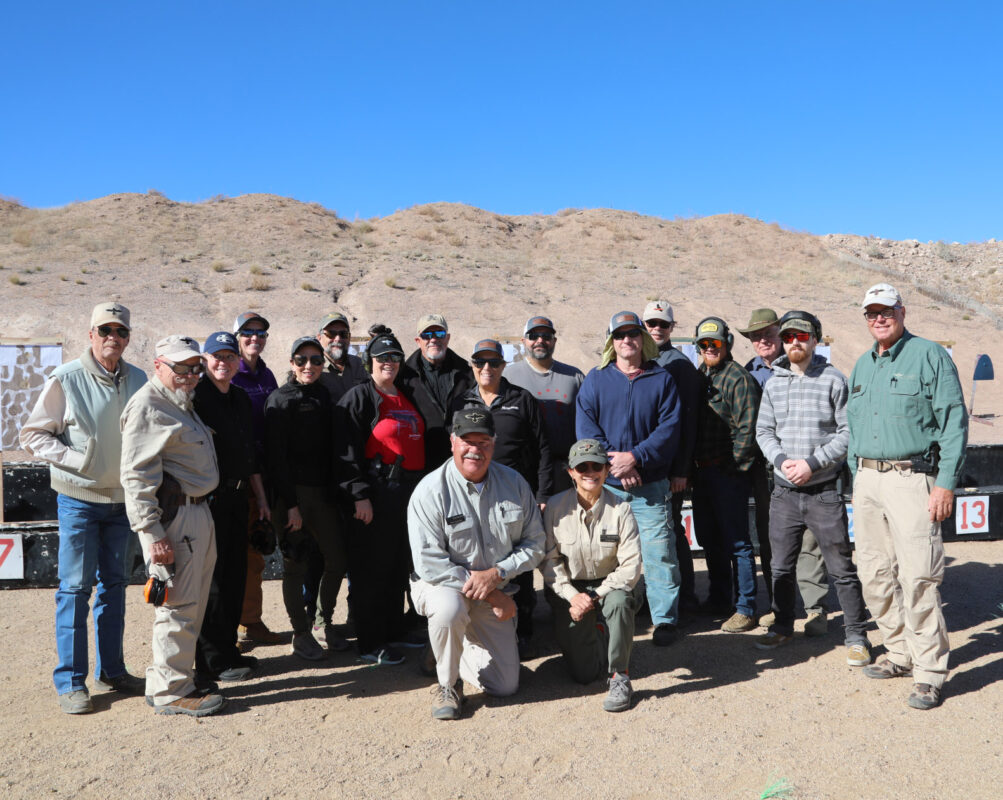 Each trip to Gunsite results in an increase and testing of my skills. The instructors do a phenomenal job of pushing you without seeming pushy. They are encouraging and helpful but want to see their students grow. They are complimentary when it is deserved and tough when needed. They always seem to strike a perfect balance.

If you can take a course at Gunsite, do it. The training you receive is world-class. They run safely and smoothly while maintaining the school’s tradition and history and making firearms training fun. As a firearms enthusiast and history lover, I appreciate how Gunsite combines modern techniques with the legacy and history surrounding Colonel Cooper’s philosophy. There are still instructors on staff who trained with Colonel Cooper and hearing them tell stories about him warms my heart.

In the words of Gunsite CEO Ken Campbell, “When are you coming to Gunsite?” 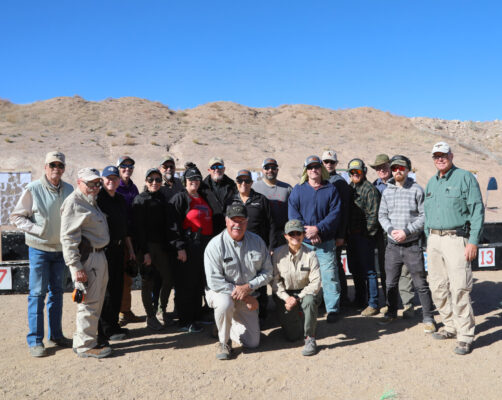 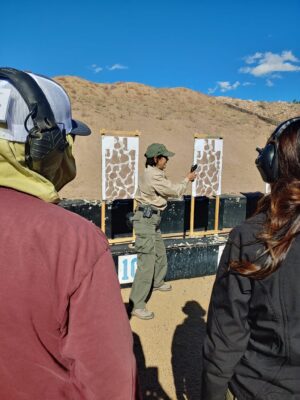 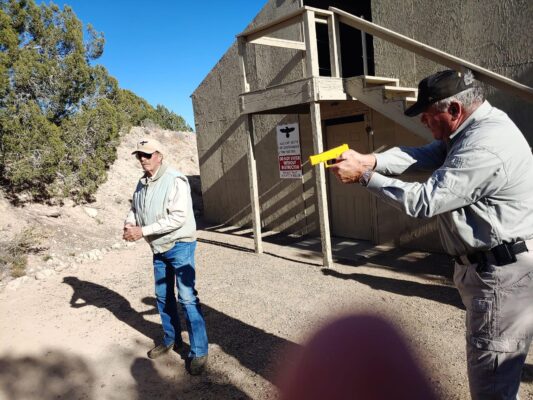 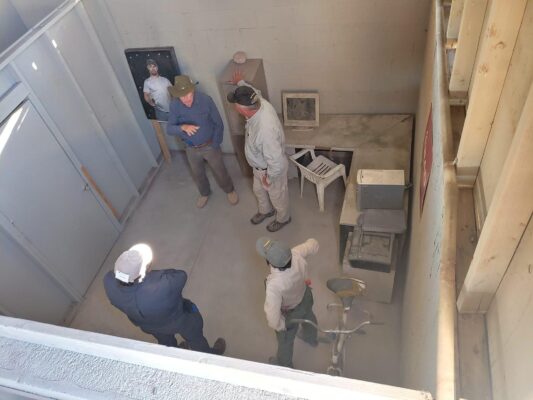 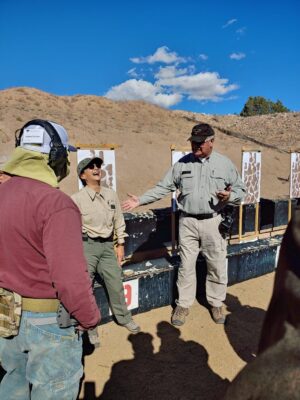 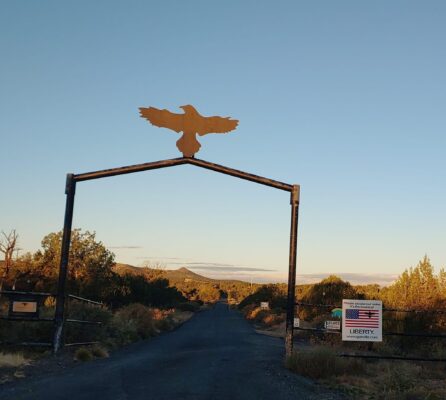 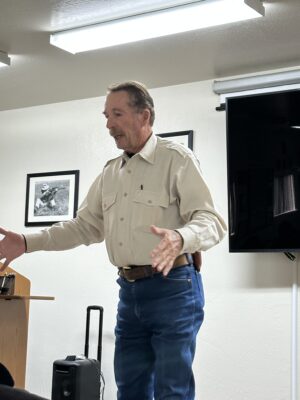 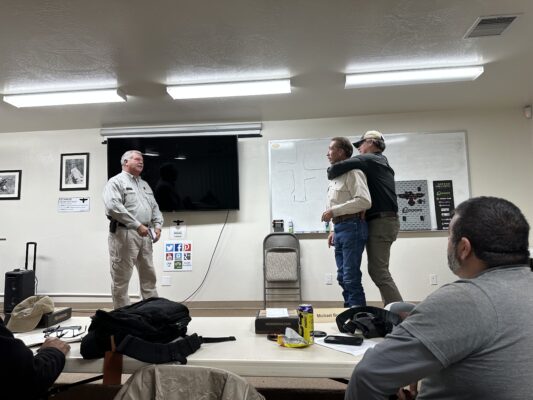 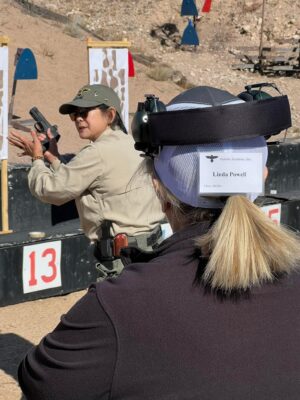 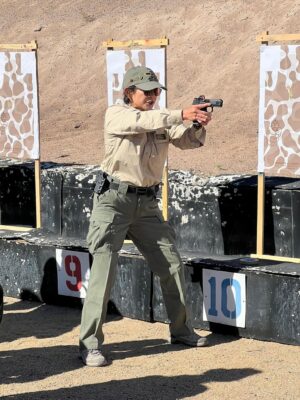 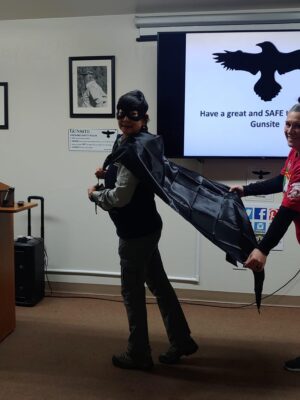 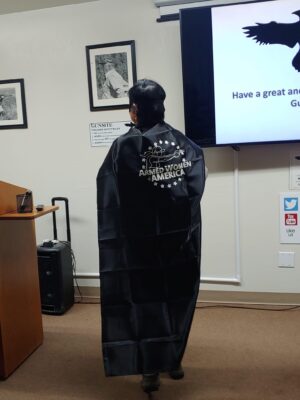